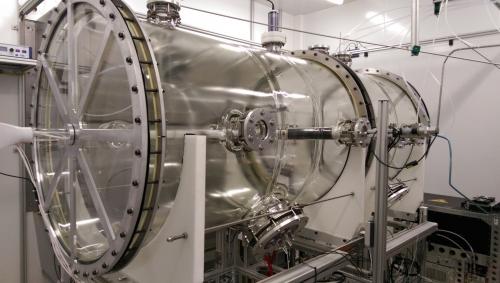 Simulation chambers are traditionally the tools to study the formation of secondary organic aerosols (SOA) (Hallquist et al. 2009). The mechanistic understanding of SOA formation is still a challenge. However, a good, explicit process description is the prerequisite for a reliable parametrization in atmospheric models. Recent studies showed that the newly discovered class of highly oxygenated organic molecules (HOM) may contribute significantly to SOA mass (Ehn et al., 2014). The trick of the HOM is that their formation by so-called autoxidation includes chains of intramolecular H-shifts in peroxy radicals with subsequent oxygen addition (Bianchi et al., 2017). The autoxidation process can lead within a very short time to multiple functionalized organic compounds with an organic-to-carbon ratio larger than 1. These end products can have a low or even extremely low volatility and thus easily contribute to SOA mass. Sequential oxidation, which needs multiple bimolecular steps, is hence not necessary.

HOM formation by autoxidation competes with other peroxy radical reactions. It can thus be seen as one aspect in the overall framework of the VOC oxidation cycle in the atmosphere. Understanding of HOM formation as a route to SOA requires new analytical techniques, e.g., to allow the speciated measurement of peroxy radicals.

The Forschungszentrum Jülich has built a new continuously stirred tank reactor for such studies. The SAPHIR* (SAPHIR-STAR, STirred Atmospheric tank Reactor) is the newest member of the SAPHIR chamber family in Jülich. SAPHIR* is an updated version of the former JPAC reactor which was used for quite a few fundamental studies (Kiendler-Scharr et al., 2009; Ehn et al., 2014; Mentel et al.,2015; Zhao et al., 2017; McFiggans et al., 2019).

One focus of SAPHIR* will be the application and development of mass spectrometric techniques for measurements of OVOC and HOM as well as of HO2 (Albrecht et al., 2019) and peroxy radicals (Berndt et al., 2018) to extend and complement the classical LIF methods for HO2 and RO2 radical determination. Another new development will be the investigation of liquid phase processes by means of coupled ion mobility spectrometry with TOF mass spectrometry. The strengthening of the SAPHIR chamber family and the development of these new techniques is supported by ACTRIS.

The SAPHIR* chamber itself is a continuously stirred tank reactor made of glass, with a total volume of 2000 l (Figure 1). Experiments in SAPHIR* are performed under steady state conditions, although the transient periods in between different steady states can also be exploited. Multiple flanges all around the glass body allow for the connection of sampling lines and analytical instruments. All surfaces inside the vessel are either made from glass or glass coated, with the exceptions of the glass-to-glass seals, which are made from Viton. The idea here was to prevent any Teflon surfaces which can act sponge-like and thus show memory effects with respect to NOX and NOY. The reaction chamber is housed in a thermostat (see background of Figure 3).

Inflow into the reactor is supplied by two separate synthetic air lines which can be humidified independently. Typical flows are in the range of 30 – 60 liters resulting in a residence time of 1-2 hours. Compared to that the mixing time within the reactor is much faster, less than 2 minutes. The two main instreams allow for an independent and spatially separated introduction of the oxidant O3 and the reactant VOC and other trace gases.

Two independent UV light systems are installed, one with 254 nm (UV-C) for O3 photolysis and OH production, and one with 365 nm (UV-A) for NO2 photolysis and consequently control of the NO level. The 254 nm lamps are shielded by movable bellows connected to linear stepping drives which allows for precise control of the lamp opening and thus the primary OH production.

The sampling system is organized such that analytical instruments can be switched from chamber outlet to chamber inlet and vice versa without affecting the residence time in the chamber. This allows for continuous monitoring of inflow and outflow without influencing or changing the chemistry inside the reactor.

All actuating variables and parameters as well as routine measurements (e.g., T, RH, CH4, CO, CO2, NO, NO2, O3, and particle number concentration) are continuously stored in a data base (Figure 3 shows a view on the operation panels). The chamber system is fully automated and can thus be operated remotely. The current analytical equipment comprises of a TOF-PTR and a Q-PTR as well as a CIMS-API-TOF with aminium ions (Berndt et al., 2019) and a CIMS-API-LTOF with a nitrate and bromide ion source. The latter was provided with support of ACTRIS. Particle concentration and size distribution are monitored by a CPC and a SMPS system, while an Aerodyne aerosol mass spectrometer measures the size resolved chemical aerosol composition.

In November 2021 we performed the first campaign at SAPHIR* with an international collaboration by the University of Gothenburg. The goal was to quantify OVOC and HOM formation under varying RO2/HO2 ratios, and its reflection in the particle phase composition. This campaign was based on the studies by Kiendler-Scharr et al. (2009) and McFiggans et al. (2019) which both dealt with the influence of mixture on SOA formation. The SAPHIR* chamber performed very well in these experiments, even when continuously operated for several days. Given by the time needed to reach steady state, boundary conditions can be varied in 6h periods. After a new set of conditions has been set and the new steady state is reached it can be investigated for hours without significant changes of the system. It was also shown that conditions could be repeated in a reproducible manor. The results from this first campaign look very promising. The research team is excited by the quality of the recent data and is looking forward to report and publish these in the near future.